When the smoke clears

A new novel from Deobrah Crombie is always a welcome arrival. She’s one of those much-to-be-envied American writers who have made a career of writing detective stories set in contemporary London. Too bad about all the time she has to spend traveling from her home in Texas to do research across the pond… 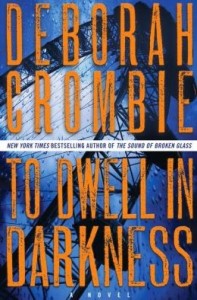 As readers of this series know, Duncan Kincaid and Gemma James are both police detectives in London, who married a couple of novels ago and, despite their busy and sometimes conflicting schedules, are raising three children, plus the odd pet or two.

As this story opens, Kincaid is trying to get used to his new assignment, having recently been transferred, for reasons that elude him, from Scotland Yard headquarters to the London borough of Camden. He’s having to work with new people, some of whom don’t much like him. Sometimes, he still needs to call on those he’s come to trust over the years for help and support.

The life he knows collides with his new duties when there’s a deadly bombing at historic St. Pancras International train station. Melody Talbot, Gemma’s friend and fellow officer, witnesses the explosion, having come to St. Pancras because her boyfriend was playing in a concert there. One of the musicians in the band is hurt in the blast, which killed the young man who was setting off the bomb.

As Kincaid and his colleagues begin to investigate, a muddled story emerges. The apparent victim is part of a group of protesters who were planning to set off a smoke bomb at the scene of the concert in hopes that doing so would bring more media attention to their cause. But someone substituted something far deadlier for the smoke bomb.

The deeper the investigation goes, the more Kincaid finds that things are not what they seem. Much seems to depend upon a mysterious stranger who was at the scene of the blast.

Kincaid eventually unravels some of what has happened. But in so doing, he uncovers more troubling mysteries, things that make him question what he’s doing in his career and fear for the safety of his family.

Meanwhile, Gemma has a troubling case of her own to deal with, and the children rescue a mother cat with kittens.

Deborah Crombie does a fine job with this series. The mysteries are surprising yet satisfying. The stories are lively but never superficial, as we learn more about the lives and motivations of the victims and criminals they encounter. Themes of family and loyalty always run through the stories. And Crombie’s rich descriptions of contemporary London – plus the history of places such as St. Pancras International Station – are always a bonus.