Small packages – when less is more

So many of the audio books I “read” go on and on. That can be good if you want to get hooked into a book that will be with you for a while, say on a long road trip. But it’s refreshing to encounter a couple of novels that are more understated. Each of these tells the tale in just six CDs, which fit into a compact package. Each offers 7 ½ hours of listening time.  One is more successful than the other, but both were entertaining. Both are ably read and work well as audio books. And both would also be entertaining and quick reads in print.

LUCKY US. By Amy Bloom. Read by Alicyn Packard. $41. Also available in print from the Random House Publishing Group.

It’s 1939. Eva Logan is a 12-year-old girl who lives with her mother, a waitress, in the Midwest. Her charming father usually visits on Thursdays and Sundays, bearing gifts and exuding good cheer. In the way that children do, Eva accepts this arrangement as normal.

Then, as the book’s opening line tells us: “My father’s wife died. My mother said we should drive down to his place and see what might be in it for us.”

What’s in it for Eva is a new life. Her mother leaves the little girl and her suitcase at her father’s house in Ohio and never comes back. Eva’s father, it turns out, had another life, with a job as a college professor, a wife with inherited money, a nice house – and another daughter, Eva’s half-sister, Iris, who is 16 and beautiful. Edgar Acton takes Eva in, but makes up a story rather than acknowledging her as his daughter.

Iris, clever, scheming and ambitious, intends to get away from her freeloading father and head for Hollywood to make her fame and fortune. Their dad, it seems, having run into some difficulties, is in the habit of stealing money from the stash Iris earns by entering various competitions.

Iris takes Eva with her when she makes her break from Ohio to Hollywood, where Iris soon finds some of the success she seeks. But the decadence gets the better of her, and an indiscretion with a rising starlet gets her on the blacklist.

By then, the girls’ father has resurfaced, and the three, along with Francisco, a gay Mexican makeup artist who has befriended them, head east for new jobs on Long Island.  Edgar is going to be a butler in the home of a wealthy Italian family, and Iris will be the governess. Francisco, who has relatives in Brooklyn, opens a barbershop. Eva helps out in a beauty parlor, where she eventually begins reading Tarot cards for well-to-do ladies.

Things go pretty well, until Iris falls in love with the household’s cook, Reenie. By then, the United States has been drawn into World War II, and events set in motion by Iris’ passion have far-reaching effects, including the arrest as a spy of Reenie’s husband, Gus, who is of German descent.

To go on with the story is to tell too much, a sin of which Bloom is not guilty as a novelist. She manages to advance her story beautifully through the effective use of plot twists that come as surprises but are completely credible in context. She does not belabor the day-to-day life when things run smoothly, nor does she overdo introspection and soul-searching. By telling less, she reveals more.

Some of the later story is told through letters, many from Iris, who by then is living in London, to Eva, and also to her from Gus, Reenie’s husband, who has long been young Eva’s friend.

The story unfolds against the rich backdrop of the 1940s, a time of great changes and social upheaval as Americans moved from the Depression era to World War II and beyond. Eva’s family – however you define that – is not the only one to include misfits and a mixture of previously segregated or ostracized people.

Eva – used by others, a smart girl who never even finishes high school – may not seem “lucky” for much of the novel, but by the time this lively, surprising, sometimes sad, often funny story reaches its end, the adjective seems perfectly fitting. 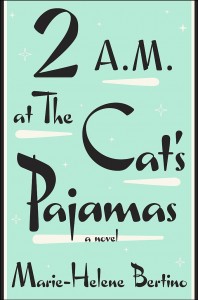 This short novel covers only about 24 hours, but they are a momentous 24 hours in the life of Madeleine Altimari, a 9-year-old motherless waif in Philadelphia. Since Madeleine’s mother died, her father has mostly been unable to get out of bed. She spends time conversing with the cockroaches in their apartment, and dreaming of becoming a jazz singer.

It’s two days before Christmas, and Madeleine runs into trouble at school, a turn of events that is not uncommon, as she has no friends and is inclined to say whatever she’s thinking, often in indelicate terms. She winds up being expelled, free to wander the city the rest of the day.

Meanwhile, Madeleine’s fifth-grade teacher at the Catholic school is preparing to go to a dinner party she doesn’t really want to attend. She’s recently returned to Philly after an unpleasant divorce, and the man she had a crush on in high school is expected to be there.

Also meanwhile, Lorca, the owner of the storied jazz club The Cat’s Pajamas, is about to have his establishment shut down by the cops, for a host of violations.

Inexorably, these separate stories and those of others – the school principal who has it in for Madeleine, the grandmotherly woman who runs the neighborhood café and helps look after Madeleine, the woman’s dog Pedro, Lorca’s teenage son – converge, with a high point coming, of course, at 2 a.m. at The Cat’s Pajamas.

This story is entertaining and has much to offer, especially as an audio book. Marie-Helens Bertino is a gifted writer with beautiful turns of phrase. The book is very funny much of the time, the tone light and playful – even when that doesn’t quite suit the subject matter.

At times, though, it seems to be more of – what? A poem? A series of clever, interrelated skits? – than a novel. There is some magical realism and a good deal of contrivance. Readers wanting credibility will have to overlook a great deal, including the idea of a school still in session on Dec. 23, and a child being expelled with no due process or parental involvement. This book is, after all, set in contemporary times.

The book is fun, worth the quick listen or read, but at the end, you feel that it’s not quite a novel that you’ve experienced. Bertino’s art and artifice at times take over her story.