Crime and politics in Scotland

It’s always a pleasure to read a book review by Tom Dillon. He reads such interesting books. This time, he’s enjoying a bit of detective fiction, but as you might expect, it’s a bit more complicated than shoot-’em-up and whodunit.

SAINTS OF THE SHADOW BIBLE. By Ian Rankin. Little, Brown and Co. 389 pages. $26 hardback. Also available in paperback and on Kindle. 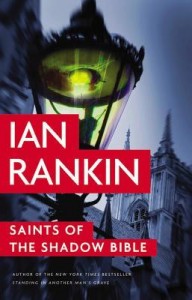 Do you ever get the feeling certain authors are playing around with you? That’s how I’m beginning to feel about Ian Rankin, creator of the Scottish detective John Rebus, after reading Rankin’s latest, Saints of the Shadow Bible.

I started reading Rankin’s Rebus novels on a trip to Scotland in 2006, and I was immediately drawn in by a detective who puts solving crime above being deferential to authorities and nice to bigwigs. That’s long been Rebus’ modus operandi. It reminds me of some newspaper reporters I’ve known.

Rebus’ life is police work. It’s one of the things that broke up his marriage long ago and allows only occasional contacts with his daughter. That, and the fact that he’s an out-of-shape older cop still smoking and drinking too much.

Anyway, I followed Rankin’s John Rebus novels right up through Rebus’s retirement five years ago in the novel, Exit Music. I said then that I didn’t think retirement was a very good fit for Rebus, and boy, was I right. Barely skipping a beat, Rankin came out with Standing in Another Man’s Grave, in which Rebus is working part-time with a “cold case” unit looking at old crimes.

And now here’s Saints of the Shadow Bible, in which the retirement age has been raised and the old guy is, believe it or not, back on the force – albeit at a lesser rank. He retired as a detective inspector; now he’s back to being a sergeant, and his former protégé, female detective Siobhan Clarke, is his boss.

Adding to the ironies, Rebus is paired with one of his old nemeses, Malcolm Fox, late of the Complaints Division of Police Scotland. Complaints is the unit that investigates rogue cops, and they’ve had ample reason to look at the career of John Rebus through the years. Can Rebus and Fox, now on the road to becoming a detective himself, get along?

Rebus, Fox and Clarke start out investigating a young woman’s car crash that quickly turns suspicious. Her boyfriend is the son of a high-ranking Scottish politician involved in the Scottish independence movement, and neither wants to talk to the police.

Then there’s a subplot, a reopened old case involving some of Rebus’ colleagues when he first joined the force more than 30 years ago. Those colleagues, known as the “saints,” swore an oath of loyalty on something called “the shadow bible,” and now some of their work may be coming back to haunt them. Was John Rebus involved in corruption all those years ago?

Handling those two plot themes at the same time is a tall order, but Ian Rankin has long since proved himself adept at such things. Further, he lives in Edinburgh with his wife and two sons, and his work shows he keeps a steady hand on the pulse of Scottish life and politics.

The whole novel, published a few months ago, takes place amid the politicking for the Scottish independence vote, which has been scheduled for Sept. 18 this year (700th anniversary of the Battle of Bannockburn, for the record, which first achieved Scottish independence from England). But the vote is just part of the background. Don’t expect a solution.

More important is this look into John Rebus’ early life as a policeman, and the delicate interplay between Rebus, Clarke and Fox as they both navigate the back roads of Scotland and try to come to terms with their former selves.

As I said, I don’t know where Ian Rankin is going with the late-life career of John Rebus, and I’ve given up guessing. But wherever the destination, the trip is going to be adventurous. I’ll keep reading.