If you haven’t discovered the books of Chris Bohjalian, you need to. I first encountered his work in Secrets of Eden (December, 2009), which impressed me a great deal. Since then, I’ve been equally impressed by The Sandcastle Girls and The Light in the Ruins  (both of which are reviewed here). The man has written 15 other novels and a collection of essays. That’s a lot of good reading to be enjoyed. 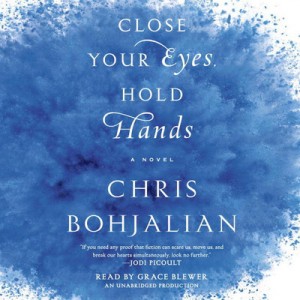 Chris Bohjalian has a well-earned reputation for beautifully written novels that provide rich insights into the sometimes-heartbreaking complexities of the human condition. He also is known for introducing his readers to an impressive variety of subject matter, often blending historical fiction with more contemporary settings. The Sandcastle Girls, for example, deals with the little-known story of the Armenian genocide during World War I and a modern-day suburban mom who is a descendant of Armenians. The Light in the Ruins is a murder mystery of sorts set in 1950s Italy, and also a story of how an Italian family was affected by their government’s alliance with the Nazis in World War II.

This book is different from those earlier novels in that, on the surface, it’s much simpler, set in the present or a not-too-distant future, and told in the first person by one teenage girl. But from the moment that girl, Emily Shepard, begins to tell you her story, Bohjalian will have captured you as surely as he always does. Before long, you will be deeply moved by what Emily has endured, what she has to say and – for this is part of Bohjalian’s genius – what she does not say.

Emily is a high school junior in the rural northeast corner of Vermont, an only child who lives in a “meadow mansion” development with her parents. She’s a somewhat introverted girl who’s a great admirer of Emily Dickinson and aspires to be a poet and novelist herself. Like most teenagers, she has her gripes and quirks, and maybe a little more problem with impulse control than some of her more laid-back peers. But things are basically OK.

And then one day, near the end of the school year, the nuclear plant near her home has a catastrophic meltdown.

Such a disaster would be terrible in any case, but for Emily, it’s much worse. Her father was in charge of the nuclear plant; her mother worked there too, in public relations. In her heart, she knows they must be dead. Worse yet, her father, who had problems with alcohol, is being blamed for the meltdown.

With passions high and her father being vilified all around, Emily is terrified. Rather than stay with her classmates as they evacuate the area, she flees and makes up a different identity.

As we get to know Emily, we learn she’s been at a hospital for a while, and that she’s talked with therapists. Saying she wants to try to tell the reader only what is true, she begins her story by talking about the igloo she made of trash bags and frozen leaves hen she was homeless in Burlington, Vt., six months after the meltdown. She lived there with Cameron, a younger boy who’d fled an abusive foster home.

Haltingly, recalling her life before the meltdown, how she survived as a street person since and the desperate decisions that finally brought her where she is now, Emily tells her story in unadorned, matter-of-fact prose. Like her idol Emily Dickinson, she uses words sparingly, and each carefully chosen word says a great deal.

In some novels, Bohjalian has helped his readers understand how people in other places and other times dealt with adversity and even atrocity. This time, the worlds are closer to home: the life of a troubled teen who finds herself on the streets, dealing with drugs, sex, bullies and self-abusing “cutters”; and a “typical” American suburban region where disaster suddenly crumbles the illusion of comfort and safety.

Emily’s story is utterly compelling. Her voice will haunt you. There is an added bonus for those who “read” the audio version. Bohjalian’s daughter Grace Blewer, who was 19 when he was writing the book and helped him with Emily’s voice and contemporary expressions, is the reader who brings that voice to life. Now an acting student, she does a marvelous job.