It’s always a pleasure when the latest installment in a good series arrives. 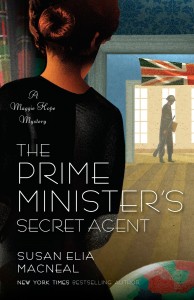 Susan Elia MacNeal’s Maggie Hope series has become one of my favorites. In Maggie, MacNeal has created an intelligent, sensitive, complex heroine who’s a convincingly real person. She’s spunky, but human. She has romantic interests, but real life – complicated by war – intervenes.

Maggie’s life story becomes a bit more complex with each book. At first, we thought she was a British orphan, reared in America by her college professor aunt. Gradually, we learn that her parents are alive – and in many ways more problem than blessing. And, surprisingly, she has a half sister in peril in Germany.

Maggie, a recent Wellesley mathematics graduate, came to England to sell her late grandmother’s house, and found herself in the midst of the action as England was thrust into World War II. She decided to stay and do her part, which soon turns out to involve spying for His Majesty’s government.

Like the previous three books in the series, The Prime Minister’s Secret Agent is a winning combination: a well-plotted mystery, a thriller with a proper share of danger, a romance, and a historical tale in which Winston Churchill and other real people march convincingly through the pages.

This time, Maggie, recovering from physical and emotional wounds suffered during her recent adventures in wartime Berlin, thinks she’s winning some peace and quiet by taking a teaching job at the remote camp in Scotland where she was trained to be a spy.

But when she visits an old friend in Glasgow, the sudden illness of three ballerinas – including her dear friend – plunges her right back into the thick of things. She finds herself working with MI-5 to uncover what might be terrible secrets.

Meanwhile, as 1941 draws to a bloody close, events in the Pacific are about to come to a head, and Churchill is planning a trip to Washington – a trip that he insists must involve Maggie Hope.

MacNeal tells Maggie’s story well, and in the process, she also tells the broader story of what it was like to be caught up in a terrible war – a war in which good people must figure out how far they can go to combat evil without becoming evil themselves.