For the first 10 years of my life, I was an Army brat. My father’s last duty station before he retired was the island of Okinawa. In the late 1950s, being the child of a U.S. Army officer on that island was like living in paradise for two years. But not so many years earlier, Okinawa had been anything but a paradise. It was the site of a nightmarish battle, the largest amphibious assault in the Pacific during World War II.

Sarah Bird, a former Air Force brat who now lives in Austin, Texas, wrote about life in an American military family on Okinawa in the 1960s in her 2001 novel, The Yokota Officer’s Club. I enjoyed that book. Her new novel set on the island is much more ambitious and powerful. 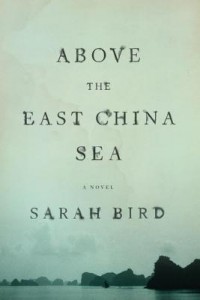 Separated by 70 years and vastly different circumstances, two teenage girls are nonetheless bound by culture, tradition and shared sorrows in this memorable novel by Sarah Bird.

Luz James is a contemporary Air Force brat, whose mother, a tough sergeant, is head of police at Kadena Air Force base on Okinawa. Dragged to yet another base, another high school, Luz mostly hangs out with the kids, American and “Smokinawans,” who get high on the beach every night. Moving repeatedly, never feeling that she belongs, is bad enough. But Luz has just lost her only real anchor: Her older sister, who shocked her by enlisting after high school, has been killed in Afghanistan. Luz is sinking further into despair and depression.

In 1945, Tamiko Kokuba, along with her beautiful older sister, is swept up in the Battle of Okinawa. The girls and their classmates at an elite high school are pressed into service in the hospitals deep in the Okinawan caves where the Imperial Japanese Army brings its wounded. The Japanese who occupy the island have talked boastfully of how they would easily defeat the invading Americans, but things do not go as expected. At the mercy of both the Japanese, who have contempt for the native Okinawans, and the invading Americans, who don’t understand or care that Okinawans are not Japanese, the girls suffer terrible hardships. Eventually, Tamiko is alone, pregnant, and mourning her sister and the rest of their family. She finds suicide the only way out.

Luz’s grandmother was Okinawan, but Luz’s mother has only vague information about the family. Being stationed on the island has not given mother and daughter the connection they might have hoped, and the loss of Luz’ sister has widened the gulf between mother and daughter.

Then one summer night, straying from the crowd at one of the beach parties, Luz sees a haunting vision of a dying young woman and a baby in a cave. Is she going crazy? Have the drugs and booze finally gotten to her? Or is there something else, something mysterious and mystical, going on?

Although most people today think of Okinawa as just another part of Japan, it historically has a distinct culture. As Bird makes clear, the Japanese were occupying Okinawa, and they sacrificed the island and its people as the American forces closed in on Japan itself. Then after the war, huge American military installations covered much of the island, further threatening its beauty and heritage.

Many Okinawans believe that the spirits of the dead are an important part of life, continuing to exert influence, and that your relatives will be with you in the next world. Remains must be properly honored; souls must not go astray. Bird has obviously done a great deal of research, but for the most part she conveys information deftly, without slowing the narrative.

As Luz tries to make sense of her own life and of the vision she saw, Okinawa is preparing for the annual festival of Obon, when the spirits of the dead are honored. Jake, an Okinawan boy who may be more than just a friend, helps her in her quest.

The increasingly connected stories of Luz and of Tamiko unfold in counterpoint, until they eventually intersect.

Tamiko’s account is heartbreaking, as the forces of war destroy a way of life and an island paradise. For Luz, though things seem bleak, there is more hope, fed by her awakening sense of family and connections.

Through these two teenage narrators, Sarah Bird tells readers much about the rich, sad history of an island that was a pawn in a war between great powers, an island that today is little more than a dot on the map to most people. Above the East China Sea is a story, too, about very different cultures living side by side. And it’s a haunting tale about war and its tragic effects, on those who fight and those who find themselves in the way.