Speaking of mysteries, foul deeds and intrigue: I seem to have missed book No. 3 in Carol K. Carr’s entertaining India Black series. My very strong clue was the arrival of what appears to be book No. 4 in my mailbox, listing the two previous novels I had read and reviewed (favorably, I might add), plus one – India Black and the Shadows of Anarchy – that I had never seen.

There was nothing for it but to enjoy the new book and make a note to pursue the one that went astray at a later date. 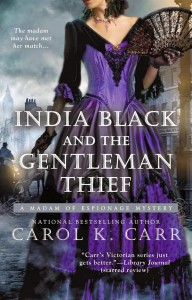 If you haven’t read any of Carol K. Carr’s previous entries in the “madam of espionage mystery” series, you might want track down the first one. Unless you’ve read that introductory book, you might have a little trouble suspending enough disbelief to accept the madam of a brothel as a plausible spy for Prime Minister Benjamin Disraeli’s government in Victorian England. Once you’ve read the first book, you should have no trouble enjoying subsequent ones, even if you encounter them out of order.

These are Victorian novels, yes, and they’re novels of espionage that draw ably on the facts of European political intrigue during the Victorian era. They are also historical romances, in that there’s a strong attraction and hint of more to come between India and the handsome spy she’s often teamed with, Major French – despite, of course, their rather volatile relationship and frequent disagreements.

What sets these novels apart from others in similar categories is India’s unorthodox profession as the owner and operator of a brothel (not to mention her past as a working girl). India’s status gives Carr free rein to depict her as a strong, independent, irreverent, headstrong and often amusing young woman with far more freedom than the more coddled (and repressed) Victorian women who people most such novels.

Once you accept the idea, India is a natural as a spy. She’s beautiful and well aware of how to use her feminine attributes to best advantage. She doesn’t mind breaking rules and can lie with a straight face. She has her own strong set of values, but they tend to be more pragmatic than those of French. And she’s competitive enough to keep up with the men, even if it means coming into closer contact with nature than she’d like, and occasionally damaging her finery.

India is sassy and resourceful, and, as a first-person narrator, frank (but not graphic) about her past lapses and her current passions. But it’s all in good fun. Even though the plight of women, especially poor women, in Victorian England is dire, and even though the intrigue and dangers are realistically developed, Carr maintains a light tone.

This time out, a colonel who is a customer inexplicably sends a shipping bill to India’s establishment. Before she can give much thought as to why, three thugs storm her door, beat up her and French, and steal the envelope. Naturally, India and French want to find out what’s going on, and very soon they find Colonel Mayhew, dead in a very grisly fashion. The mystery and action pick up quickly, taking our intrepid spies out to sea, into the countryside and in harm’s way. To make things more complicated, a figure from India’s past is in league with the bad guys.

Just to complicate things and provide further personal intrigue for future volumes, a difficult houseguest complete with entourage arrives at India’s establishment. India learns more about her personal history, not to mention her surprising current social status. What fun!