What an amazing life she led

Some books are entertaining but unapologetically superficial, a good read or listen but nothing more. That’s fine, and sometimes, that’s exactly what we want. Other books are richer and more complex, telling a good story, to be sure, but also offering layers of memorable information and insight. Such is the new novel by Elizabeth Gilbert.

I had not read any books by Gilbert, who has gained considerable acclaim for her fiction, her long-form nonfiction, and her memoirs, especially Eat, Pray, Love.  In fact, I identified her mostly with that memoir and the subsequent movie, and when the hefty box that contained the audio version of her new book arrived, I almost set it aside, thinking it was more of the same.

Thank goodness I started to listen … and couldn’t stop. 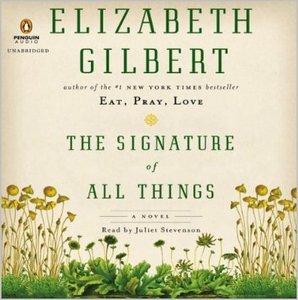 Late in life, Alma Whittaker is somewhat taken aback when a new friend marvels at the amazing life she has led. After all, for the first nearly half century of her existence, she barely left the Philadelphia area. Also for nearly that long, she had no suitors, and when she finally married, the union failed spectacularly almost immediately. Most of her visible life’s work as a botanist consists of a few academic books on mosses, of interest only to bryologists. She did have one grand idea, but lacked the confidence to make it public.

But Alma’s life story is, indeed, amazing, and in the telling of it in, Elizabeth Gilbert has created a grand, panoramic, unforgettable novel.

Gilbert begins The Signature of All Things well before Alma’s birth, with the story of how Alma’s father, Henry Whittaker, rose from poverty in 18th century England through ocean voyages and jungle adventures to become the richest man in America. By the time Alma was born in 1800, Henry was a wealthy man with a flourishing business in exotic botanicals and pharmaceuticals. He had married a stolid, no-nonsense and highly intelligent Dutch woman so that she could be his ballast, a role she fulfilled well.

A bright child, Alma is taught many things by her mother and allowed in her free time to roam the family’s White Acre estate, where she delights in exploring nature. Her upbringing is highly unusual for a girl in the early 19th century; she is exhaustively educated and taught to be assertive and questioning. Her social training is largely the exchange of ideas with guests, usually intellectuals, at the family dinner table. She learns none of the social graces that would help her enter Philadelphia society and find a husband.

Alma’s highly privileged existence is badly shaken when her parents adopt a girl her own age who is orphaned when her mother, a prostitute, is murdered on their estate. The girl, renamed Prudence, could hardly be more different from Alma. Alma, unusually tall, dark and stoutly built, looks very much like her father, a fact that is deemed unfortunate by everyone except Henry. Prudence is petite, blonde and astonishingly beautiful. Even Henry Whittaker calls his daughters “the pretty one” and “the smart one.”

Though she’s obviously not destined to be a belle, Alma has normal yearnings – yearnings that are generally considered abnormal in polite Victorian society.

Alma’s fate in life seems to be to stay at White Acre, help with the family business and help with her increasingly difficult father, especially after her mother dies. With her world so circumscribed, she finds a universe to study in the mosses that grow on a boulder field on the estate.

Then when Alma is almost 50, her life changes profoundly. She falls in love with a beautiful, strange and gifted young man, who is obsessed with worlds that have meant little to her – the worlds of the spirit, of religion and the supernatural. Then her father dies, freeing her.

The woman who had barely been out of Pennsylvania now has adventures in Tahiti and in Amsterdam. She has experiences far beyond her imaginings. And she comes to deeper understandings of the nature of life. When Charles Darwin and Alfred Russel Wallace begin society’s great debate on evolution, what they have to say is nothing new to Alma Whittaker.

Henry’s story alone could make a good novel. Alma’s story certainly would. But Elizabeth Gilbert deftly works in so much more: the effects of colonialism, the development of science, the power of religion, the growth of commerce, the changing role of women… . Alma was born at the start of the 19th century, a time when the world changed dramatically, and through her long life, she experienced and savored many of those changes.

Apparently as much a student of botany as Alma is, Gilbert treats us to detailed and intriguing descriptions, from the vast oceans to the Andes, from the hillsides of Pennsylvania to the cliffs of Tahiti. This is an ambitious, captivating novel, one that will stay with you long after you reach the end of Alma’s story.

Juliet Stevenson, an accomplished British actress, does a magnificent job with the audio version. She’s especially skilled with the various accents, be they British, American, Dutch or Tahitian.

This entry was posted in Audio Books, Contemporary literary fiction, Historical Fiction and tagged Audio Books, Elizabeth Gilbert, The Signature of All Things. Bookmark the permalink.