Before the textile mills came to my home state of North Carolina, they were major economic forces in New England. This fascinating historical novel by the author of The New York Times bestseller The Dressmaker is built around the true story of a murder at textile mill in Massachusetts that was one of the first to employ large numbers of young women. 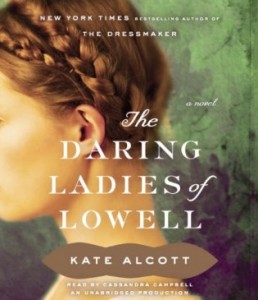 Kate Alcott had a winner with her 2012 novel The Dressmaker, the story of a young woman of limited means who survived the Titanic disaster and then made her way in New York. She uses much the same approach in her new book, again to good effect, in this new novel.

The historical event at the heart of The Daring Ladies of Lowell is not nearly as well known as the sinking of the Titanic, and learning about it is in some ways more fascinating. Alcott draws on the true story of the sensational murder of a young woman mill worker in Lowell, Mass., and the subsequent trial in 1833.

She tells her story through the viewpoint of Alice Barrow, one of the many young New England women who became “mill girls” in an attempt to escape a harsh life on a farm and establish some kind of financial independence.

One of Alcott’s talents is the ability to take a great deal of historical information and weave it into a compelling work of fiction. She describes vividly the harsh conditions under which these women – often mere girls – worked. The hours were incredibly long and the work exhausting. They were in danger from both unsafe machines and the cotton dust that fouled their lungs. The mill owned the town, and the workers had to pay some of their hard-earned money for room, board and any “extras” they might fancy at the company store.

In the mill boarding house, Alice becomes friends with Sarah “Lovey” Cornell, a spirited young woman who bends the rules and challenges authority. When Lovey is found strangled, Alice is determined to see that justice is done.

Meanwhile, Alice has come to the attention of Samuel Fiske, the elder son of the wealthy mill owner, Hiram Fiske of Boston.

As the trial of the man accused of murdering Lovey progresses, and as some of the mill girls and other workers become increasingly disgruntled with their working conditions, Alice feels torn between her feelings for Samuel and her loyalty to the friends with whom she has much more in common.

The romance is another similarity between this book and The Dressmaker. As with the earlier novel, that plot line is somewhat predictable, and some of the scenes and writing border on being trite. Again, the question is whether Alcott needs the romance. Could the book have been stronger if it focused even more on the plight of the mill workers, without one of them having an improbable chance to escape with the owner’s son?

But that would have been a different book, and using a romance to propel a novel rich in historical insights is, apparently, what Kate Alcott does well. As it is, The Daring Ladies of Lowell is a historical novel rich in insights into the early feminist and labor movements. It’s also a good story that keeps you reading – or listening, if you choose the well-done audio version read by the accomplished Cassandra Campbell.