For 11 years now, Anne Perry has given her fans a Christmas present: a holiday novel, one of her engaging Victorian tales with a Christmas setting. These books offer support for the theory that good gifts come in small packages:  They are briefer than Perry’s usual novels, but each offers a complete and satisfying tale, an excellent way to get into the right frame of mind and spirit for the season. 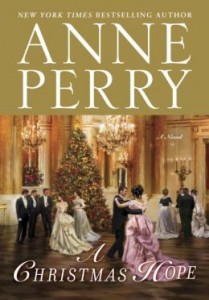 Claudine Burroughs finds no joy in the prospect of the holiday season. For her, Christmas is largely a chore, as she must accompany her ambitious husband, Wallace, to meaningless social functions with the wealthy, often shallow people he wishes to impress.

Claudine knows that in material terms, she’s much more fortunate than many people in Victorian London, but she can’t help wishing her life had more meaning. For years, her marriage has been merely one of convenience and social necessity. There’s no warmth or closeness in the relationship, and her husband is forever finding fault with her behavior. She’s too willing to speak her mind, too reluctant to be a hypocrite.

Worse, in his mind, is the outlet Claudine has found for her emotions, the one place that she feels useful and real. She volunteers frequently at the women’s clinic run by Hester Monk, wife of William Monk, the head of the Thames River Police. Wallace, appalled that she deals with prostitutes and other “unsuitable” women there, often threatens to forbid her this outlet.

Things begin to change for Claudine when she takes momentary refuge on the terrace of a fashionable home where she’s attending yet another stifling holiday party. She had thought she alone had stepped out into the unseasonably warm evening for a little privacy, but instead she finds herself talking with Dai Tregarron, a beguiling Welsh poet.

Then, before the evening is over, a young woman of the street has been mortally wounded outside the party house, and Tregarron is the prime suspect.

Claudine, finding herself more involved in this turn of events than she should be, determines to do what she can to help Tregarron. The more she learns, the more she suspects that blaming the somewhat disreputable poet is a convenient way to avoid a scandal among upper-crust families. She also befriends a young woman who seems to be about to settle for the same sort of loveless marriage that makes Claudine so unhappy.

Claudine tries, against considerable odds, to do the right and just thing. Eventually, she finds that Christmas is brighter than she expected. Readers will find their hearts and spirits warmed along with hers.