C.C. Benison’s Father Christmas mysteries are not really Christmas books, at least not in terms of a warm, feel-good holiday setting and theme. The main character, Tom Christmas, is a vicar of a church in small English village, hence the name. And the series titles and storylines are following “The Twelve Days of Christmas,” having started with Twelve Drummers Drumming and worked through Eleven Pipers Piping. Oh, and the books are released in the fall, just in time for holiday shopping for anyone on your list who likes cozy British mysteries. 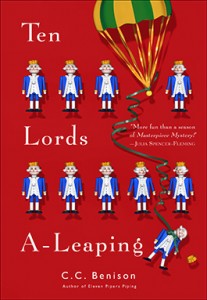 As the third mystery in C.C. Benison’s engaging series opens, Father Tom Christmas finds himself engaged in the unlikely and rather terrifying activity of skydiving from an airplane. It’s all a part of a scheme to raise money for the sorely needed new roof for the church in the English village of Thornford Regis of which he is vicar.

Participating in the Leaping Lords fundraiser had seemed a fine idea in the abstract, a way to raise a good sum of money in one fell swoop, so to speak. When Tom finds himself plummeting toward the ground with the radio that was supposed to bring him instructions not working, the idea seems decidedly less wonderful.

Tom winds up with a badly injured ankle, meaning that he’s unable to continue with his plans to drive himself and his young daughter, Miranda, to visit family for his 40th birthday celebration. For readers, Tom’s injury means that he’s stuck for the weekend at Eggescombe Hall, the grand manor where the parachute landing took place. And his forced visit, of course, is the perfect setup for a classic British country house/village murder mystery, in which everyone is a bit too close for comfort.

Writing such old-fashioned mysteries – with just enough contemporary details to make them fresh – is what Benison does very well. Fans of fact-paced mysteries with lots of action and gore should look elsewhere. This is a novel for savoring, for reading by a warm fire with a cup of tea, or on a sunny vacation veranda with a cool drink. The story unfolds slowly, and, true to life in a village, there are many subplots and side stories, some of which may be red herrings when it comes to figuring out whodunit.

Those who want their mysteries violent and fast probably will have given up long before the first corpse appears in this tale, along about page 100.  But those of us who read this sort of British mystery as much for the atmosphere, side stories, eccentric characters and wry humor as for the murders won’t mind a bit waiting until Tom finds the body of Lord Morborne in the manor’s labyrinth. Nor will we mind discovering the intriguing reason why he’s up so early in the morning, penitently seeking spiritual renewal.

Denison’s books bear more resemblance to Agatha Christie’s tales than to many of the mysteries popular today, and, true to the form, Lord Morborne is a despicable sort whose death offers an abundance of suspects.

Also true to the Christie tradition, the Father Christmas mysteries are not designed for impatient readers with short attention spans. That’s particularly true in this book, because a convoluted and acrimonious family relationship is an important part of the plot. Years earlier, a marquess abandoned his spouse and married his brother’s wife, a move that yielded today’s seething stew of siblings, half-siblings and cousins, many of whom are present when murder strikes.

Thank goodness Benison provides not only a list of characters but also a family tree at the front of the book. Otherwise, the relationships might be so confusing as to cause a reader to give up in despair.

Once again, Benison gives us more than a well-plotted mystery and an entertaining visit in the English countryside. Ten Lords A-Leaping, particularly through the thoughts of Tom Christmas, quietly deals with questions of human nature and the true nature of justice and forgiveness. Well done.