What a happy thing it is to be in on the debut of a good detective series. This one’s set in Barcelona, so it offers the added attraction of virtually visiting an exotic foreign setting. 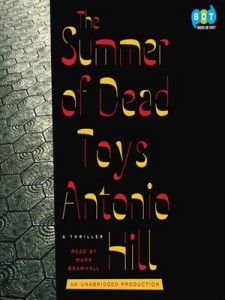 Antonio Hill has done a remarkably good job with this novel that introduces his new detective, Inspector Hector Salgado. The Summer of Dead Toys has all the elements that make for a highly satisfying police thriller – good writing; a plot full of twists and surprises that lead to a believable conclusion; a detective who is longer on thought than violence, a person who is highly likable in spite of – or perhaps because of – his flaws; interesting, complex supporting characters; and insights into human nature, including but not limited to the darker side.

The audio version read by the actor Mark Bramhall is compelling and easy to follow. I can imagine that the print version is equally satisfying.

Salgado is an Argentine who came to Barcelona as a young man. When we meet him, he’s just returned from a forced vacation back home in Argentina, where he went to hide out until the scandal surrounding his vicious beating of a suspect cooled down. Salgado’s outburst of violence surprised even him, but he was pushed beyond his limits while dealing with traffickers in young girls.

Not long before the incident, his life had taken a bad turn when his wife left him for another woman, making his relationship with their teenage son more difficult. He doesn’t want to lose his job as well.

New developments arise in the human trafficking case, but Salgado is ordered to steer clear. If you believe that he’ll obey that directive, you haven’t read many detective thrillers.

And even though Salgado is still officially out of action, his boss assigns him to what seems to be a routine case, partly to keep him busy, and partly to mollify an old friend. The friend is the mother of a college student who died by falling out an upstairs window in the home in an upscale neighborhood where he lived with his father and stepmother. To all appearances, his death was an accident or suicide, with alcohol likely involved. But his mother, who had long been estranged, wants more answers.

The case, of course, turns out to be not nearly as routine as it might seem. The more Salgado and his partner, an ambitious young woman, look into things, the more tangled and ugly the case becomes. They find themselves antagonizing some wealthy and prominent people.

On more than one level, this book is about families. It’s about how some families hide dark secrets for the sake of appearances and convenience. And it’s about love and loyalty, and what makes for a worthwhile relationship.

I look forward to meeting Hector Salgado again, and finding out more about Barcelona.