A Muslim’s view of Jesus

Some people are outraged by Reza Aslan’s new book about Jesus. Some praise it. Lots of people seem to have opinions. Steve Wishnevsky has a suggestion: read it. 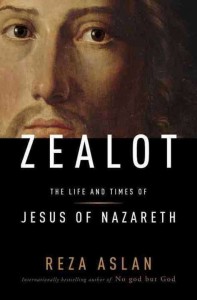 This is a most entertaining new look at an old subject, a book that has cause enough controversy to rocket to the top of the bestseller lists, probably because of the hate it has garnered from the right.  How dare a Muslim write about Jesus? Very well, as a matter of fact.

Aslan has collected and edited the primary sources concerning Jesus and done an admirable job of demystifying a person who is almost invisible under the centuries of partisan re-branding. Jesus was a Jew, in a time of deadly unrest in Israel. There were dozens of other Messiahs, all of whom left much more in the way of historical documentation than Jesus. Aslan, no relation to the Lion of C.S. Lewis, has brought nothing new to the table, but much as in Thomas Jefferson’s edit of the New Testament, seeing things you already know in linear narrative form brings a sharp new focus on “The Greatest Story Ever Told.”

Most interesting to me was the struggle between James, the brother of Jesus, and Paul over the direction the not yet founded church would take. Sadly for the world, James was killed, and Paul’s heresy became dogma.  Leonard Cohen, a Zen Catholic Jew, wrote, “Give me Stalin and St. Paul,” a theological statement of remarkable pith. It is safe to say that Paul killed Jesus more effectively than Pilate ever did.

Aslan has quite a bit on Pilate, a well-known historical figure, and a Roman functionary, a cold bureaucrat who never would have expressed doubt as to the Divinity of some rebel. His job was to kill Zealots, which he did, with Roman efficiency. The very fact of Jesus’ execution by crucifixion argues that fact clearly. The Jewish Temple executed heretics by stoning, as they did with James. QED.

All of this bodes ill for my personal belief that Jesus was a Buddhist, but facts are like that. I feel that Aslan did not give proper weight to the Gospel of Thomas, but he is the scholar, not me.

A worthy read. Buy it.