Chris Bohjalian is without a doubt one of the finest writers in America today. His novels are literary without pretension and compelling stories without unnecessary artifice. He writes about terrible events so that we comprehend their enormity without being blinded by our horror to their greater truths. 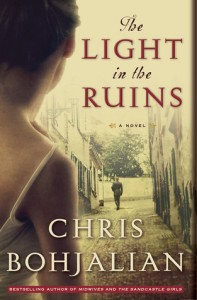 It is 1955, in postwar Italy, and someone is murdering members of a proud old family. When the first woman is found dead in Florence, her heart cut out of her body after death, the police think they may be dealing with a madman. When her mother-in-law is found murdered and desecrated in the same horrible way, they understand that someone is killing the remnants of the Rosati family.

Serafina Bettini, a pioneering woman investigator with the Florence police, becomes convinced that the murders have something to do with events that swirled around the Rosatis during World War II. The war profoundly affected Serafina herself; she is forever marked with disfiguring scars, which she tries to conceal with her long hair and modest clothing. She is not always as successful at hiding her psychological scars.

Before the tide of war turns, the Rosatis live a storybook life in a working villa in the hills south of Florence. They have olive groves, gardens, livestock, all tended by villagers. The ancient villa, with its swimming pool, terrace and works of arts, is a genteel home for the marchese, his wife and their 18-year-old daughter, Cristina. Cristina’s two older brothers are away, one an engineer with the Italian Army, doing the bidding of the Germans, and the other an archeologist, struggling to save Italy’s treasures.  Francesca, the daughter-in-law, and her two young children also live in what they all hope is the safety of the old villa.

But an ancient Etruscan burial site on the grounds attracts the attention of the Nazis, and German soldiers as well as archeologists show up more and more often. At first, the marchese, trying to be pragmatic, entertains the Nazis cordially. Cristina, robbed of her social life by the war, falls in love with a young German soldier. Then, as the war in Italy goes badly and the Germans become more occupiers and enemies than allies, the family finds itself threatened by both the Nazis and local resistance fighters.

Though her memories of the time she almost died are vague, Serafina knows she was in the vicinity of the Rosatis’ villa during those terrible days in 1943. As she pursues the murder investigation, she must contend with questions about her past as well as whoever is stalking the family’s survivors.

As he did in The Sandcastle Girls, a novel that deals with the Armenian genocide in World War I, Bohjalian has written a powerful novel that masterfully conveys the essence of a historical event or period – in this case, the plight of the Italian people, most of whom were uneasy at best with their government’s alliance with the Nazis. He uses just enough well-chosen details and events to tell the story. He’s also written a hair-raising murder mystery, one that’s difficult to put down.

The human condition as portrayed by Bohjalian is full of ambiguities, paradoxes and contradictions. Good and evil, right and wrong, are not always as clearly delineated as we might hope, and war vastly complicates life’s dilemmas.

This is a fine book, as literate as it is suspenseful, altogether a pleasure to read.