Here’s a good, rather old-fashioned novel that relies on excellent writing, skilled character development, vivid descriptions and considerable insight into human nature to tell its story. In print, it would be a great choice for a vacation or other time when you can savor a book. I found the audio version an excellent traveling companion. 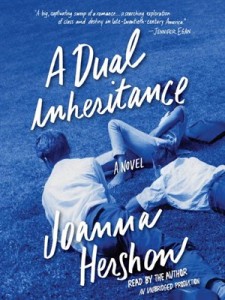 “Dual inheritance theory,” we learn in a brief note at this novel’s beginning, explains human behavior as being the product of both genetic evolution and cultural evolution.

By the time Joanna Hershon has followed her main characters through more than 40 years of their lives, she has ably demonstrated the validity of that theory. But she has also done much more, giving the idea of “dual inheritance” several additional layers of meaning.

The initial premise of the book is not unlike the plot of many a familiar novel. We meet two seniors at Harvard who develop an intense friendship despite their obvious differences: Ed Cantowitz is a brash, ambitious Jewish scholarship student from a working-class neighborhood in Boston. Hugh Shipley is a tall, charming,  languidly handsome son of an old-money WASP family that spends its summers on an island.

Each young man admires some traits in the other, and both want to rise above the seeming inevitability of their backgrounds. Then Helen, Hugh’s girlfriend from boarding school resurfaces and becomes a permanent addition to their relationship. Ed, somewhat cynical and very determined, is not above hoping that his connections with Ed and Helen will help him in his plans to take Wall Street by storm and make a fortune.

While Ed is carving out his business empire, Hugh is off to Africa, first to try his hand at filmmaking and then to address the terrible problems of poverty and disease he finds there. And something happens to abruptly end their friendship.

With beautiful attention to detail and atmosphere, Hershon describes the two men’s lives as they develop separately, yet always with thoughts of the other – what he would say, what he would think.

With events and cultural shifts of the late 20th century and early 21st century skillfully woven into the background, we follow Ed and Hugh as they pursue their careers and make their ways through marriage and fatherhood. Each is far from perfect; one or the other of them deals with infidelity, divorce, alcoholism, even prison.

It is through the chance boarding-school friendship of their daughters, Ed’s Rebecca and Hugh’s Vivi, that the three people who shared such an intense youthful friendship – Ed, Hugh and Helen – are uncomfortably reunited. And the stories of this next generation of the Cantowitz and Shipley families add depth to an already rich novel.

If the basic plot outline of A Dual Inheritance sounds familiar, it is because the elements of the story are so true and enduring. People are strongly influenced by their backgrounds, sometimes even more so if they try to escape them. And often we have more in common than we realize with people who seem quite different.

Hershon takes something familiar and makes it wonderfully fresh by creating characters who come vividly to life, flaws and all, and placing them in settings that we can see and feel. She tells her story well, and leaves it to the reader to draw any lessons from it.

Hershon does a remarkably good job of reading her novel aloud. The story is long, but it gets more absorbing as it progresses. As an audio book, this is an ideal companion for a long drive or any situation in which you have the time and the attention to savor good writing.