North Carolina and the KKK?!

The KKK in North Carolina? White hoods and crosses may not be much in evidence these days, but Tom Dillon reviews a book that argues that the Klan’s legacy is strong in today’s political climate. 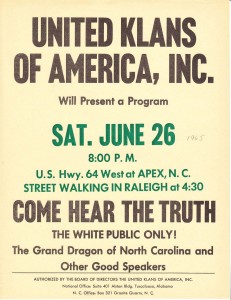 The biggest political gathering in North Carolina in the year 1966 attracted more than 5,000 people to Raleigh Memorial Auditorium on a hot day in August. It was so big that some 2,000 people couldn’t get in and milled around outside, probably grateful to hear one of the featured speakers come out and talk to them.

The meeting attracted attention statewide, but it was not a civil rights rally or a meeting of a chartered political party.

It was a Ku Klux Klan gathering, and it was in a state that some in the organization called “Klansville U.S.A.,” which was not hyperbole. At the time, the United Klans of America presence in North Carolina eclipsed Klan membership in all the other Southern states combined.

For a state that has historically been proud of its Southern progressive reputation, that was – and still is – a little hard to take. Newspaper editors, religious leaders and some state officials regularly called the Klan “un-American” and “revolting” and “poisonous” to the state’s interests. But they couldn’t argue with numbers.

Those numbers show that in 1966, Mississippi had 76 klaverns (or local units), Georgia had 57 and Alabama had 40. None of them could compete with North Carolina, which totaled 192 klaverns with between 10,000 and 12,000 dues-paying members.

If you’re surprised by this, that’s understandable. Most of the violence of the Civil Rights era was further south. Mississippi is where Medgar Evers and other civil rights workers were murdered, and Alabama is where Klan supporters – not convicted until years later — blew up a church, killing four young girls. Alabama is also where Gov. George Wallace stood in a schoolhouse door and proclaimed “segregation forever.”

But in a sense, the Klan’s hold on North Carolina is not surprising, says author David Cunningham, a professor at Brandeis University in Waltham, Mass. That’s because North Carolina politicians, at least publicly, preached moderation and trying to get along with federal rulings on such things as school desegregation.

And that didn’t set with people like Grand Dragon Bob Jones, a Navy veteran and Rowan County awning salesman. He took on state officials such as Capus Waynick, a former ambassador to Nicaragua and Colombia and Gov. Terry Sanford’s unofficial racial troubleshooter. And he bragged that he drove 100,000 miles a year organizing klaverns.

Most of the Klan effort was in eastern North Carolina, where the fall of Jim Crow would be more damaging to white interests. But the Klan also operated in such places as Salisbury, Jones’ hometown, and Greensboro, where its remnants would be involved in a murderous shootout with members of the fledgling Communist Workers Party in 1979.

That “Greensboro Massacre,” for the record, is what first got Cunningham involved with North Carolina. He worked as an investigator with Greensboro’s Truth and Reconciliation Commission, testified in several court cases, and still researches the causes and consequences of racial violence – as well as their legacy.

We may think of the Klan as an “anachronism” – Capus Waynick’s word in 1963. And indeed, Jones’ UKA has long since been bankrupted by lawsuits, infighting and federal investigations. But its leavings are evident today, Cunningham says, in such phenomena as the rise of the Republican-dominated South.

“UKA organizing in the 1960s shaped political orientations and augured remarkable shifts in electoral politics in the 1970s,” Cunningham comments in his epilogue. “Recognizing the UKA’s role in these well-documented trends demonstrates how the past predominance of white hoods continues to matter to residents of the Tar Heel State …”

Some warnings are called for. This book could not have been written without liberal use of the “N-word” – this is the Klan we’re talking about. If that bothers you, please don’t read the book. Also, don’t expect to find a scintillating tale that will keep you on the edge of your chair. Cunningham is a sociologist, and his book is at heart a sociological study.

But it’s fairly complete, going back to the Klan’s origins in the 19th century, and retelling such horrifying stories as the Wilmington race riots of 1898. Cunningham has mined well the newspapers of the Civil Rights era in North Carolina. Indeed, I found the names of several former newspaper colleagues in the lengthy bibliography that is included here.

This book is subtitled, “The Rise and Fall of the Civil Rights Era Ku Klux Klan,” but the Klan’s legacy remains. Jones’ claim that the UKA’s influence would ultimately be through “ballots” rather than “bullets” has proved true, Cunningham says, and we won’t discard that history easily.

“Though the flames have dimmed,” he says, “only by telling – and listening to – the story can we forge a common path.”

2 Responses to North Carolina and the KKK?!