Jane Austen is amazing. Not only have her books, published in the early 19th century, stood the test of time, but they have also inspired countless spinoffs into the 21st century. We’ve had Stephanie Barron’s mystery series with Jane as sleuth; Jane Austen vampire novels; the novel The Jane Austen Book Club; P.D. James’ Death Comes to Pemberley, and countless attempts at sequels, prequels and retellings of Pride and Prejudice and other beloved Jane Austen novels.

I used the convenience of audio books to “read” all Jane Austen’s novels a few years ago when I began my travels as a teacher at somewhat distant universities. I’m as big a fan as anyone. Here Anne Barnhill, a novelist herself, takes a look at the middle book of a relatively new Jane Austen derivative series. This book is available as a Kindle edition on Amazon as well as in paperback, a publishing arrangement I’m seeing more and more. 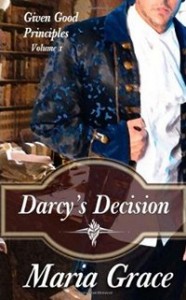 The Future Mrs. Darcy is the second book in a trilogy, a sort of prequel series to Jane Austen’s Pride and Prejudice.  In this book, the Bennet family is besieged by problems: a regiment of soldiers has come to Meryton and, of course, Lydia, the family’s wild child, is causing problems; Mrs. Bennet learns of the scandal and retreats to her sickbed, leaving Jane and Elizabeth to run everything; and, the decent families of the area are beginning to shun the Bennets, ruining any chance for good marriages for the girls.

Maria Grace does a credible job of recreating one of the most famous families in English literature, and their trials and tribulations are both amusing and convincing.  The plot becomes more complicated when Mr. Bennet allows Lydia to stay with the colonel’s wife (surrounded by officers!) while he leaves town to attend business.  How can Elizabeth and Jane salvage their family’s reputation and bring Lydia’s outrageous behavior to a halt?  Grace gives the reader a satisfying conclusion, and it’s great fun to revisit the delightful Bennets.

Grace’s third book in this trilogy, All The Appearance of Goodness, is now available. So is the first, Darcy’s Decision.