A modest civics lesson on a lofty subject

Paul O’Connor (no known relation to Sandra Day O’Connor) is embarking on his annual driving trip, which means lots of good listening/reading time for him, and lots of good reviews for us. 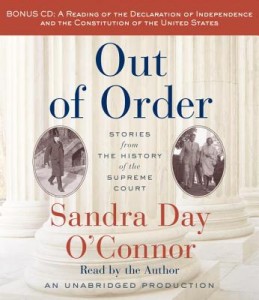 It’s an oddity of America’s civic structure that justices of the Supreme Court can declare a federal law unconstitutional one day and walk about their hometowns in relative obscurity the next.

That kind of thing happened often to former Justice David Souter, and the story, as told here by his former colleague, says much about the little book that Sandra Day O’Connor has written.

Out of Order is not a memoir, a history of the high court, a treatise on constitutional law, nor even a case study – although it contains a bit of each of those. Mostly, it is an attempt by the nation’s first female high court justice to familiarize us all, just a little, with the history and workings of the court.

So, there is a long chapter on the circuit riding that justices had to endure for approximately the first century of the republic. Justices would get on horses or sit in wagons and travel as much as 10,000 miles a year, often staying in fetid taverns or roadside inns, visiting the different federal courts in their districts. The wear and tear on the jurists was significant and led many to either leave the court after only a few years or leave this life earlier than they might have otherwise.

There’s also a chapter on the workings of clerks and the history of their employment by the court.

O’Connor also traces the court’s migration from New York to Philadelphia, eventually to Washington, all through a number of spaces borrowed from other courts, a city government or the U.S. Senate. It is only in the 1930s that the court got its current home, its first permanent home. The story of the design of that building constitutes one of the more interesting chapters.

She follows a number of the more colorful jurists. I didn’t know that Oliver Wendell Holmes had been shot in the neck during the Battle of Antietam or that William O. Douglas tried to take part in court deliberations even after he’d resigned his seat. (I did recall, however, that Douglas was quite the rogue about Washington.)

This book meets her goal. It is a small civics lesson on the judicial branch and the high court. One need not be a lawyer, constitutional scholar or court follower to appreciate it in that regard.

Here’s where the “but” comes in.

Out of Order is an appropriate name for the book because it lacks any discernible order. One gets the impression that Justice O’Connor strung together a number of the general education lectures she’s given over the years and turned them into a little book. The listener will get the sense that it is entirely possible to jump to any part of the book at any time and not be lost, or to listen to the chapters in random order.

It’s important to understand that this is not a tell-all book. O’Connor provides not a single ugly or dissatisfied word about any of the justices with whom she served. Any criticism is reserved for justices of bygone eras, and even those comments are rare. Considering the contentious issues of her tenure, it’s hard to believe that everything was as sweet and nice as she portrays.

The justice, herself, reads the audio book, a feature I first found unpleasant but grew to like. But an experienced audio narrator would have improved the listening experience.

Out of Order won’t go down in Supreme Court literature as one of the great books by a former justice, but it is a pleasant and informative listen (or read).