I grew up in a family in which good grades and high test scores were highly prized, and where sibling rivalries could be heated. So the title of Jennifer Close’s second novel caught my eye. The book proved to be what I expected in some ways, and quite different in others. 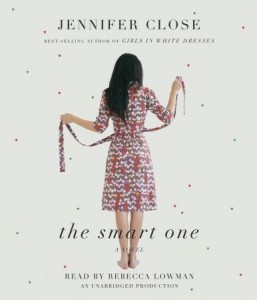 When Weezy Coffey was growing up, her parents often said that she was the smart child and her sister, Maureen, was “the pretty one.” Weezy would do well in school and have a fulfilling career, so the mantra went, and Maureen would “marry well.”

Instead, Weezy is the one who made a good and lasting marriage. She’s devoted more of her energies (and intelligence) toward raising her three children than toward excelling in a career. Maureen’s marriage wasn’t a success, but she’s done well enough for herself.

In their own way, Weezy and her husband have labeled their children, much as Weezy’s own parents did before them. Martha, the eldest, has problems getting along socially. She’s smart enough, and manages to graduate from nursing school, but she never quite fits in.  There’s just something off about Martha.

Claire, a year younger, is “the smart one” for this family. After college, she headed for New York, where she landed a job and an apartment, made friends and became engaged.

Max, several years younger, is the only boy and the baby, a status that is a double blessing, or perhaps curse, for him.

And now that Weezy and her husband should be enjoying their empty nest, feeling proud of the good life they’ve made and waiting for the rewards of watching their offspring succeed and provide them with grandchildren, things aren’t going according to plan.

In fact, things are falling apart.

Martha, unable to stand the pressures of a nursing career, moved back home a few years ago and took a job at a clothing store.

Much more shocking, Claire and her fiance broke their engagement, and eventually Claire runs out of money, unable to afford the expensive apartment they’d been sharing. Before long, she, too, quits her job and moves back home, and the two sisters, though 30 and 29, slip back into their squabbling adolescent ways.

Even as Weezy is struggling to deal with her no-longer-empty nest and her great disappointment at not having a wedding to organize, she learns that Max, now away at college, also has a life-changing problem.

The family relationships portrayed in this, her second novel, are real and credible, sometimes funny and sometimes exasperating. The characters are well drawn and convincing. None of them is completely appealing, but, as with real relatives, you come to care about them all – although with some, the concern may be more nosiness to see how things turn out than wholehearted affection.

This book is about the nature of families and how they shape us, for better and worse. It’s about home, in Robert Frost’s sense of “… when you have to go there, they have to take you in.” It’s also about what it means to be “smart.”  We see that the force of intelligence and sheer determination may not be enough to control life, and sometimes being “smart” may involve not trying quite so hard.

Well read by Rebecca Lowman, the novel grows on you gradually. The biggest disappointment may be that just about the time you realize you really do care what happens to the Coffey family members, the book ends more or less in mid-story. Of course, that lack of resolution, that sense that there’s really no telling what might happen next week or next year, also is true to life.