A lesson in loyalty

Bob Moyer’s reviewing has gone to the dogs – in a good way. 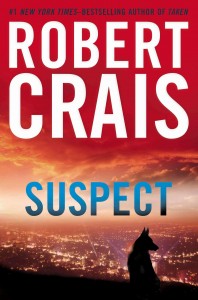 I’m Nesta, and I’ve taken on Bob as my alpha.  He asked me to collect a few critical comments from my canine friends about Robert Crais’ latest book.

None of us can write of course, (you know, that opposable thumb, can’t-read-the-computer-screen thing), but a few of us can read. Of course there’s not much to read. Not too much holds the attention of someone who has 1/8 of their brain tied to their nose. It’s hard to interest us with a story trail (people have story lines, we have trails) about a police officer who left his partner during an unexpected assault, and now suffers serious PTSD while trying to get back on active duty. We would NEVER leave our partner.

He signs up for canine duty, and that’s where it gets interesting. He meets Maggie, who lost her handler to an i.e.d. in Iraq. She, too, is traumatized – but she’s a German shepherdess with the mostest, the cat’s meow. Somehow Crais got inside her head and really gets my ears up with her inner dialogue. It takes a little while, but she finally trains the cop to be as true as she is. The scene in his crate really cemented the deal, they way she makes sure he’s safe before she lies down.

Then, of course, when they start chasing down the guys who shot him and his partner, she hits a homer with her sniffer. And when the bad guys go after – well, I don’t want to give too much away. Let’s just say you’ll probably like her as much as I do. Good dog. Good book. Bow WOW!

This entry was posted in Thriller/Suspense and tagged detective fiction, Robert Crais. Bookmark the permalink.