What a great, immensely entertaining book – and it’s educational, too. This would be a good choice for a book club, for vacation reading or any time you want to get transported by a good story. 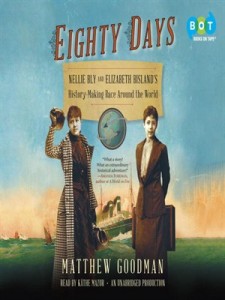 One could say, by way of praise, that Matthew Goodman’s Eighty Days is a history that reads like a novel. It’s that good a story. One could just as accurately say that this engrossing tale of two women travelers is an intensive history, with layers upon layers of insights into a fascinating variety of subjects ranging far beyond the around-the-world race.

On Nov. 14, 1889, Nellie Bly set sail from Hoboken, N.J., on what was essentially a publicity stunt. A crusading reporter for Joseph Pulitzer’s World newspaper in New York, Bly set out to race a fictitious traveler – Jules Verne’s Phileas Fogg, an imaginary Englishman who had traveled around the world with what was considered amazing speed in the wildly popular 1873 novel Around the World in 80 Days. The World offered more altruistic reasons for her adventure, saying that her trip would be indicative of how rapidly any typical first-class passenger might expect to travel in the modern age of steamships and fast locomotives. But the real reason was to boost readership, which after phenomenal growth, had begun to lag.

Later that same day, Elizabeth Bisland set out in the opposite direction by train, heading across the United States, in a race against Nellie Bly. Her editor at The Cosmopolitan magazine, recognizing a great gimmick when he saw one, decided to get in on Nellie Bly’s action, giving Bly only a few hours to prepare.

Though the book is a riveting story, it’s not fiction, so a desire to learn the outcome of the race between the two women cannot be what keeps us reading. We’ve heard about Nellie Bly and her around-the-world exploits, even if we might not know the details of her journey. Elizabeth Bisland, however, is an unfamiliar name to most people early in the 21st century. In fact, Goodman points out, for most of her journey, Bly was unaware that Bisland was also traveling; she considered Phileas Fogg and his 80 days as her true competitor.

That we already know who “won” doesn’t really matter, however, because this book offers so much more – including a mostly unstated but useful lesson for today’s Americans, in an age when reporters and commentators so often evaluate even our nation’s politics almost exclusively in terms of winners and losers. In real life, things are not that simple and clearly defined.

Goodman gives insights into the lives of these pioneering young female journalists, whose journeys were remarkable in the Victorian age almost as much for their daring in traveling alone as for their speed. They had in common that each was making her way in what was clearly still a man’s profession, but even their approaches to journalism were very different. Bly was a crusading, scrappy reporter who threw herself into her stories. She excelled in exposes, which she was able to pull off because the public didn’t know what she looked like or even her real identity. Her first big story was an expose of the treatment of women in a New York insane asylum, where she managed to get herself committed (without being sure she could get out).

Bisland was more interested in literature and the arts. A cultured, thoughtful writer, she enjoyed the society of like-minded people, but never wanted to be a public figure. Bisland was also known to be extraordinarily beautiful, while Bly was more ordinary in appearance.

Bly grew up poor in Pennsylvania coal country. Bisland grew up in an established Southern family that fell on harder times after the Civil War, but still managed to be aristocratic. Bly enjoyed visiting saloons; Bisland was more likely to be at a literary “salon.”

Bly set out on her journey with one dress and one bag – a small, leather gripsack. Bisland hastily filled a steamer trunk with multiple dresses and shoes, stuffed a couple of other bags – and thought she was traveling light.

As they traveled around a world largely dominated by the British Empire, Bly grew to loathe and resent the British, while Bisland felt admiration and kinship.

The two women’s journeys are described in rich detail. Although they traveled in opposite directions, Bly and Bisland used the same main routes, both traveling through England, France and Italy, transiting the Suez Canal, and stopping at such ports as San Francisco, Yokohama, Hong Kong, Singapore and Colombo.

An account of these two women, where they went, what they saw, and how travel was accomplished as steamships and trains came into their own would have made for a fascinating book. But Goodman moves naturally into all sorts of subjects that come up as his story progresses.

Thus we learn about the power of newspaper journalism in one of its golden eras, as well as the obstacles that aspiring female journalists had to overcome. We learn about British imperialism, and the importance of controlling strategic stations for fueling ships. We learn about the vast amounts of coal required to keep trains rolling and ships moving ever faster, and the devastating effects on those who mined and shoveled that fuel. We learn how the United States came to have its time zones. We learn why it took so long for the Statue of Liberty to be erected in New York and where one of its arms rested in the meantime. We learn about Jules Verne and his wife, whom Bly visited in France. I could go on … but read the book yourself to unearth these and other historical treasures.

Goodman also follows, succinctly, Bly and Bisland through their lives after their celebrated race. What happened to Nellie Bly, who for a time was wildly popular, more celebrated than any of today’s Hollywood stars, is a cautionary tale on the price of fame, as much a problem in the 1890s as it is today.

Listening to the audio version of the book, expertly read by Kathe Mazur, was vastly entertaining. I did, however, find myself sometimes wishing for a map, which the print version provides, along with an index.