How did that happen? How did the United States win World War II, only to find itself within months embroiled in a frightening, costly “cold war” with one of its former allies? Paul O’Connor looks at a book that provides some insights. 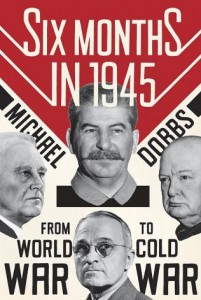 It was some time in the fall of 1962 that I learned how Franklin Delano Roosevelt had sold out freedom, liberty and all of Eastern Europe at the Yalta Conference in 1945.

For an 11-year-old, that was disturbing news.

There at the corner of Church and Chapel streets, at the entrance to the “Historic New Haven Green,” right along the bus route to my school, a reactionary group had displayed a series of tombstones each marked with the name of a Soviet satellite and the year it fell to Soviet domination. All of the tombstones were blamed on the sellout at Yalta.

After reading Michael Dobbs’ Six Months in 1945, I’m left with the same question I had as an eighth grader after we studied World War II: What else could President Franklin Delano Roosevelt or Prime Minister Winston Churchill have done in the six months between Yalta and the Japanese surrender?

By the end of the European War in May 1945, the Red Army occupied almost all of the territory that Josef Stalin would turn into his Iron Curtain buffer with the West. Great Britain was defeated in victory, out of money and out of all will to wage a new war against the Soviets. The U.S. was the war’s one true winner, untouched at home, victorious in two theaters and in position to be both a military and economic superpower.

Who wanted any more war? No one except a few crackpots.

Yet, it persists in right-wing 20th century history that somehow, had he been tougher and healthier, FDR should have forced Stalin to retreat behind his own borders, taking nothing of consequence for the destruction of the Wehrmacht for which Soviet land forces were largely responsible.

Dobbs chronicles how in each of the eventual Eastern Bloc countries the Soviets politically out-maneuvered the West to gain control. They slid their puppets into positions of power under the charade of democratic action in 1945 and then asserted an iron fist to maintain control over the next five years.

The political right argues that had we been better at political intrigue, we could have stopped this. Nothing in the Dobbs book indicates that we had any reasonable opportunity of accomplishing that, because while the Soviets won politically, they also had the advantage of the Red Army’s presence.

In Italy, France, eventually Greece and Iran, where the American and British armies were in control, we just happened to win the political maneuvering. And, as Stalin reminded President Harry Truman whenever the latter would complain about the way the Soviets were operating in Poland or Czechoslovakia, the U.S. was operating the same way in Italy and France.

There are those who would answer my question with two words: atom bombs. We had the bomb in July 1945, and yes we did flex our muscles with the Soviets a bit after we knew the thing would work. But here’s something few right-wingers mention when they say we should have wiggled a few Hiroshima-style bombs at the Soviets and suggested that they retreat: We were just about out of the bombs after we leveled Nagasaki, and we didn’t have enough of the key ingredients to make a bunch more right away.

Dobbs is a veteran newspaper reporter and the son of a U.S. diplomat who spent a long stint in Moscow. His writing is terrific. He has collected reams of detail that he then delightfully weaves into a narrative that is both informative and enjoyable. His very first chapter, in which he describes FDR’s auto journey to Yalta, is a gem, an insight into not only the president but also a grim landscape of the devastation that Mother Russia had suffered at the hands of Hitler’s army and air forces.

I waited a long time for the answer to my eighth grade question: What else could we have done in 1945?

Patience. Just wait and the Soviet model will collapse under its own incompetence.

Paul T. O’Connor, contributing editor, is a university lecturer who is available for freelance writing assignments. Contact him at ocolumn@gmail.com.