Out of retirement, into a mystery

Old detectives, it seems, are a lot like old soldiers – except that in addition to never dying, they rarely fade away. Tom Dillon reviews a new Ian Rankin book (published in Great Britain last year) in which John Rebus is back at work, at least for a while. 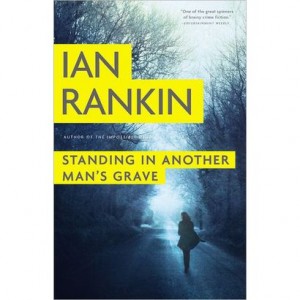 You probably remember Sir Arthur Conan Doyle bringing Sherlock Holmes back from the dead after that unfortunate incident at Reichenbach Falls in Switzerland. The way I understand it, readers were so upset that Sir Arthur had to do something, so Holmes returned, and we’ve been wondering ever since how he survived that harrowing fall. Among various Internet guesses are (1) Holmes landed in a rubbish truck, (2) the body that went over the falls was a dummy, and (3) Dr. Watson hallucinated the whole thing.

Well, this is a bit the same, minus the rubbish truck. After 19 John Rebus mystery novels, it’s understandable that Ian Rankin would have tired of his grubby Scottish hero and wanted some relief from the constant diet of cigarettes, caffeine and booze. But Rankin was a little more careful; no waterfalls for him.  He only had Rebus age out (in Exit Music, from 2009) and have to retire from his job as a detective inspector with the Edinburgh police.

And it’s here that the Holmes and Rebus situations become similar. We readers didn’t buy it that Rebus would be willing to spend his dotage lying on a beach in Florida or even in the South of England. The man’s marriage broke up long ago, and he has no hobbies beyond an odd affinity for what we might call modern rock music. (The title of this book comes from a Jackie Leven song, for the record.) I predicted when I reviewed Exit Music that Rebus would flunk retirement, and I was right.

“Triumphant” is not a word one uses describing John Rebus’s work, no matter how many crimes he’s solved. But here he is, a civilian working for the police “cold cases” department and looking into crimes the police have never been able to solve. Then one Nina Hazlitt shows up, still trying to find out what happened to her daughter Sally, who had disappeared years earlier while traveling on a remote highway in the Scottish Highlands.

Something about Nina touches Rebus, and he starts looking into the situation, only to find that several other young women have disappeared from the same road in the same way during recent years, the last only a few weeks ago. Suddenly, what had been a cold case becomes hot again, and Rebus gets temporarily reassigned to his old post at Edinburgh’s Gayfield Square precinct. Just like that, he’s back on the job solving mysteries.

Some familiar faces readily appear. Rebus’ old sidekick, Siobhan Clarke, has been promoted from sergeant to detective inspector, taking Rebus’s old chair, and it turns out that underworld icon Morris Gerald “Big Ger” Cafferty is also still around. He suffered his own Reichenbach Falls injury in Exit Music, and many of us had expected him to spend the rest of his days in a nursing home. He’s old and slow, a lot like Rebus, but he’s still here.

Oddly enough, so is Malcolm Fox of the Complaints Department. That department investigates wrongdoing among Scottish police, and Fox – just as strait-laced as Rebus is slovenly – has long since been trying to get the goods on Rebus. This situation is odd because Fox has been the hero of a couple of Ian Rankin novels (The Complaints and The Impossible Dead) in Rebus’ absence. I’d thought Fox and Rebus might get along together, but I was wrong.

Anyway, Clarke, Rebus and Clarke’s new boss, James Page (the same name as Led Zeppelin’s guitarist, Rebus notes) head for the Highlands to try to solve what increasingly looks like a strange crime spree. We get taken up the A9 highway through Pitlochry and Blair Atholl and eventually to Inverness and Scotland’s north shore, where Rebus gets to meet the man who first developed the police’s cold case unit, for which he’d been working.

What transpires is by turns confusing, gruesome and surprising, with Rebus as usual bending some of the police rules in search of truth. But I can’t tell you any more beyond this one tidbit. That tidbit is the fact that the retirement age for Scottish detectives has been raised, and Rebus, it seems, could have a few more years on the force if he can talk them into taking him back.

There are folks opposed to that – Malcolm Fox, for starters, and a few others who don’t like Rebus’ rule-bending. But you’ll have to read the book if you expect to find out who prevails. The only hints I’ll give you are that the story doesn’t involve any rubbish truck, there aren’t any dummies, and it’s for damn sure that no one besides Ian Rankin could hallucinate the ending we actually get to this John Rebus story.